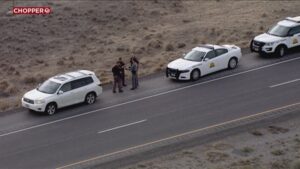 TOOELE COUNTY, Utah (KSL) – An 18-year-old man suspected of killing three people, including a 16-year-old girl, at a rural Native American reservation in Northern California has been captured in Utah.

Two people traveling in a separate vehicle were also detained.

Johnson is wanted for the murder of three people Wednesday at a home on the Rohnerville Rancheria Reservation.

Two juveniles were found unhurt in the home and were placed in safe custody.

Johnson was arrested on a murder warrant and is being held without bail.

Other details, including whether Johnson was related to the victims or the motive for the killings, are unclear.