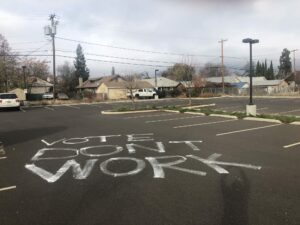 Jackson County’s own elections clerk supports the legislation. “Written in these huge, probably six to eight, possibly even 10 foot letters were: ‘VOTE DON’T WORK’ and then just south of that ‘NEXT TIME BULLETS.’ And it literally just, it threw me off,” said Chris Walker, the Jackson County elections clerk, going into her 14th year.

She said threatening vandalism was found in the parking lot across the street from the elections office, just one day after the county certified the 2020 elections results. “I can’t believe the stuff we’ve heard about happening around the country, it’s here and now in our own county — in Jackson County. It was very disheartening, and very disturbing, as well,” said Walker. 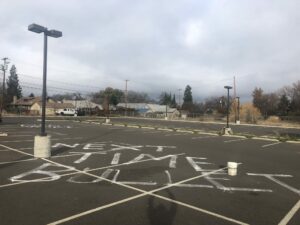 “Election workers, we need them to just go process the ballots. So I think they deserve a higher level of protection,” said Representative Kim Wallan.

Now, in an effort to better protect elections workers legislators have introduced House Bill 4144. It would exempt elections workers from disclosing their addresses in public records laws and include steeper penalties for anyone who threatens or harasses an election worker doing their job.

“You think about it, because you go by that parking lot every day, or you see it every day. And you  [think] is today the day? Is it next time bullets? Does that mean, next election?” said Walker. The clerk said the bill is a non-partisan issue supported by the Oregon Association of County Clerks.

“This is about protecting people. It’s about protecting election workers. It doesn’t matter whether you’re a Democrat or Republican, Independent, non-affiliated voter or an array of other affiliations for parties, or voter registration. It is an issue to protect workers, to protect people,” said Walker.

UPDATE: In regards to the vandalism, the Jackson County Sheriff’s Office said this was a difficult case to investigate. Aaron Lewis, with JCSO said there were no known suspects and there was a lack of actionable evidence. Police say no cameras pointed to the vandalized part of the parking lot.

“Since we found no evidence, and no leads, we performed extra focus patrols in the area to make sure that the the workers there, and any people that were voting would be safe,” said Lewis. JCSO said it staged officers near the drop boxes to ensure everyone’s safety.