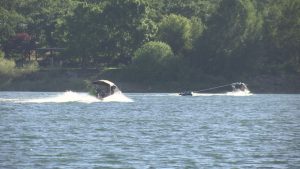 OREGON– If you’re heading to Oregon’s waterways this weekend with a paddle board in hand, don’t forget your permit.

It replaces the ‘Aquatic Invasive Species Permit,’ which will remain for out-of-state motorized boats and is included in Oregon boat registration fees.

The new permit isn’t just for paddle boards, but any non-motorized boats 10 feet and longer.

“In the last ten years, non-powered use has just skyrocketed. They’re helping take care of the recreational sites that we have and a lot of that new money is going towards new, non-powered boating facilities,” said Sgt. Shawn Richards, Jackson Co. Sheriff’s Office.

You can buy it online through ODFW or the Oregon Marine Board’s website or through an ODFW licensed agent or office that sells licenses.

Children 13 and younger do not need a permit.