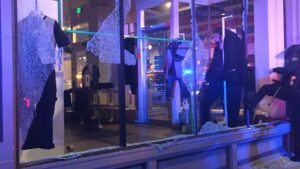 The Unified Command of the Portland Police and Multnomah County Sheriff’s Office said they believe one suspect threw a Molotov cocktail at officers.

According to Unified Command spokesman Chris Liedle, deputies seized a rifle with a full ammunition magazine at the time of the arrest.

The suspect was wearing a tactical vest with ballistic plates.

Governor Kate Brown activated the Oregon National Guard in response to the protests.