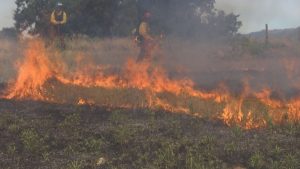 Central Point, Ore. — If you saw smoke pluming near the Table Rocks Friday, it was all part of a controlled burn organized by Oregon Department of Forestry. Around 50 firefighters worked orking away at burning more than 30 acres of land. It’s all in preparation for the peak of fire season.

“This might be – for some of them – the first time they actually get to fight a grass fire,” said Melissa Cano, Oregon Department of Forestry.

“We’ll come in, lay fire on the ground, put it out – and it’s a great training for real situations,” said Tate Stevens, third-year ODF firefighter.

It’s the capstone to two weeks of fire school.

“It’s so valuable to take everything that they’ve learned over the past two weeks and actually see it develop in front of them,” Cano said.

“These kinds of fires right here are good training because it’s controlled, we have fire line already dug around it,” Stevens said.

After burning, the firefighters will spend a couple hours mopping up any hot spots for any areas that may produce more heat later on.

“Scanning of all the black-charred areas for hot spots,” Cano said.

Another skill firefighters practice to make sure their fires stay suppressed and controlled.

“As you get more experience and more fires under your belt, it becomes a lot easier,” Stevens said.