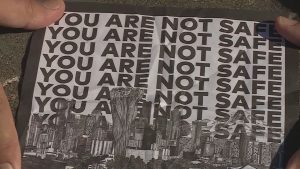 Marc Shelffo and Henry Bridger snatched the pieces of paper off the ground, unfolded them, and started scratching their heads.

“I just noticed today several other people unrelated to us were posting that they found these as well and they thought it was really interesting,” Bridger said.

“This one just says you are not safe with the Seattle skyline and the same ominous date,” Shelffo added.

“I had some friends at Amazon say they’re not going to go to work on the 28th so Amazon, if people aren’t showing up on the 28th, now you know why,” Shelffo said.

THESE origami are also showing up in the U District, South Lake Union, and downtown, and they’re generating a lot of chatter on social media, as people speculate about who or what is behind this campaign.

Shelffo said, “It did dawn on me that it might be some sort of art project to raise consciousness about something, I mean I know I’m not safe already I watch the news every day.”

For a city so used to eccentricity, these sure do make you wonder.

“I don’t know what the message is that they’re saying but September 28 seems to be the day,” Bridger said.

Police officials say they don’t have any information about the origami or who is responsible for placing them.