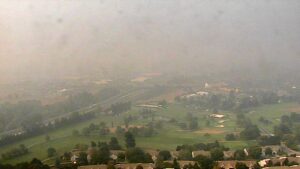 MEDFORD, Ore. – The State of Oregon is experiencing record poor air quality this week, according to the Department of Environmental Quality.

The DEQ said Medford, Klamath Falls, Portland, Eugene, and Bend exceeded their daily records for poor air quality during this wildfire season. The previous records in Southern Oregon were set in September of 2017.

Up until now, Medford has been the only city in Oregon to record “hazardous” air quality. Last week, Eugene had five “hazardous days,” Bend and Medford had three, Portland had two, and Klamath Falls had one.