SALEM, Ore. (KGW) — Oregon voters narrowly passed Measure 114 this midterm election, which will require permits and firearms training before new gun purchases and ban high-capacity magazines. The Oregon Secretary of State’s office said that it will take effect in just over three weeks — on Thursday, December 8.

That is, Measure 114 will take effect unless it’s successfully challenged in court, which is a possibility. Multiple county sheriffs across Oregon have expressed not only their expectation that the law will be overturned on constitutional grounds, but their hope that it will be.

While there are a number of outstanding questions about the measure and what will happen when it goes into effect, there’s one thing we know right now: gun sales, or at least attempts to buy guns in Oregon, have shot up since Election Day.

Oregon State Police data shows that from 2018 through this past Monday, there were nearly 1.6 million background checks performed on people wanting to buy a gun. The Firearms Instant Check System, or FICS, is the type of check that happens in Oregon to flag people who can’t legally buy a gun. 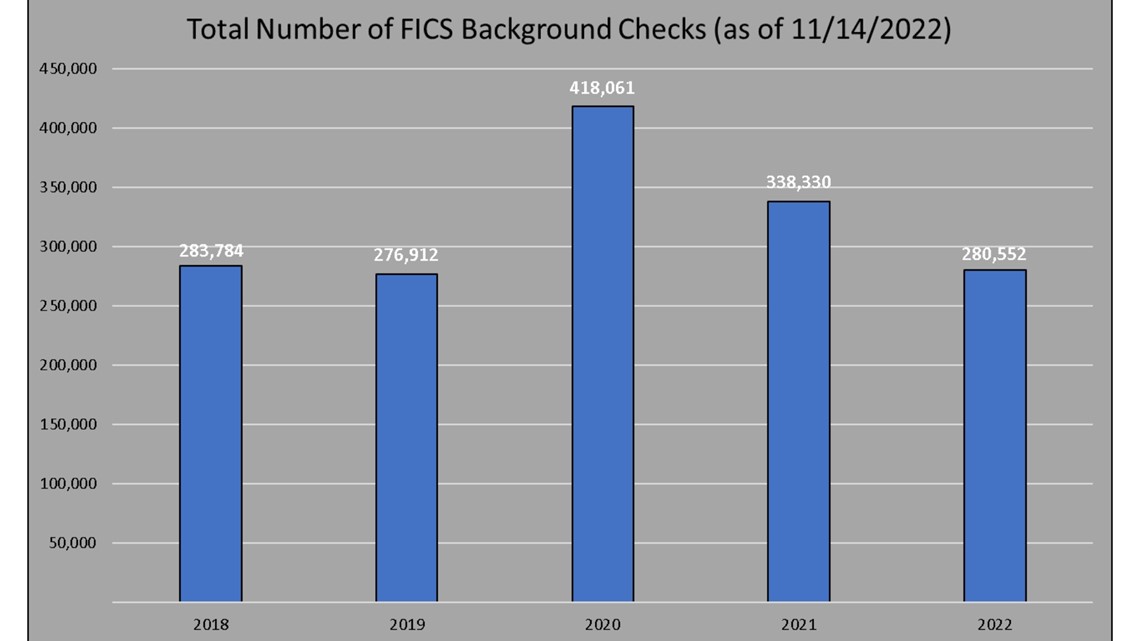 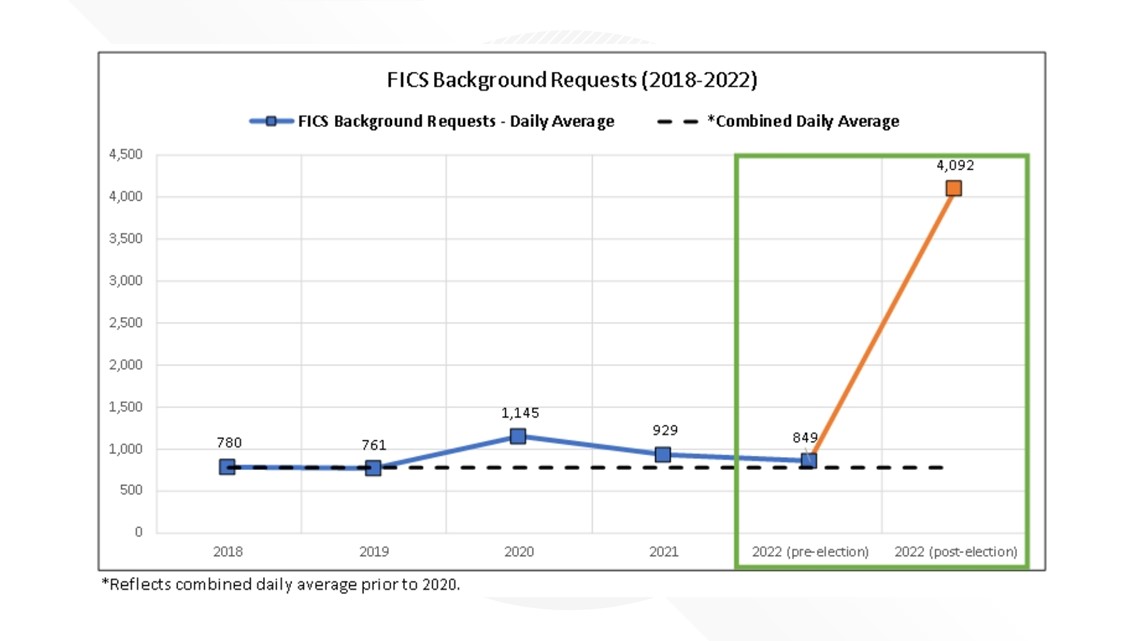 OSP said that during the week of the election alone, there were over 18,000 transactions. As a result, there’s now a considerable backlog for these background checks on people trying to buy guns.

There was a big backlog right after COVID-19 restrictions took effect in early 2020, and it fluctuated for two years before finally being eliminated over this summer. It spiked again just before the election, and has been blasting off to the moon ever since — forming a near-vertical line on OSP’s graph. 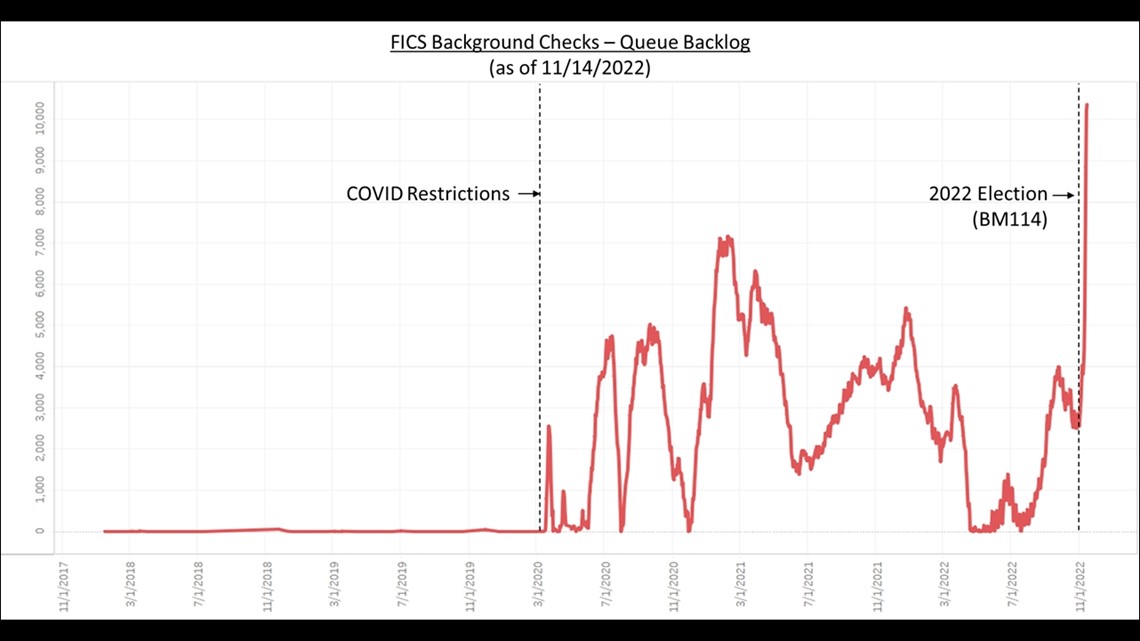 As Measure 114 nears taking effect, OSP is responsible for making a standardized application that sheriff’s offices and police departments throughout Oregon can give to people hoping to buy a gun. The application itself has not yet been finalized.

According to The Oregonian, even the people who drafted Measure 114 thought that if it was approved, it wouldn’t take effect until the middle of January, a month after votes are certified. But the Secretary of State’s office says that voter-approved measures like this one take effect a month after Election Day. Now agencies have a month less than expected to plan and prepare.

Meanwhile, people on both sides of the issue are full of questions about what the specifics of Measure 114 will actually look like. A number of viewers contacted KGW, many asking how the law applies to people who already have a concealed handgun license, which requires a type of training similar to the new permit requirements.

Lincoln County Sheriff Curtis Landers helpfully provided some insight in a statement he released about Measure 114 on Wednesday. Landers said that while the new permit process is “comparable” to the CHL training, there are differences.

The training course described in Measure 114 requires a demonstration of how to load, unload, store and fire a gun. If a CHL course includes all of those things, then it’s interchangeable with the new permit requirement. But, he said, most CHL course do not include the firing part of the process, and that will need to be a part of a class in order to be used under 114.

Once Measure 114 goes into effect, prospective gun-buyers will not be able to buy a gun with only a CHL — they will need to go through the permit process, which can be easier if they have had CHL training that checks all of the new boxes, but only then.

The new permit is also needed for private gun sales, though Landers noted that there are a few exceptions, mostly for transfer between relatives.

Then there’s the matter of Measure 114’s ban on magazines that hold more than 10 rounds. Landers underscored that it’s still legal to purchase and keep high-capacity magazines until the law takes effect, as long as you have proof that you bought them before December 8 of this year.

Oregon’s restriction on magazines is actually already being challenged as unconstitutional, thanks to a federal lawsuit filed in California before the 9th Circuit Court of Appeals. While the lawsuit challenges a California law, any ruling handed down by the 9th Circuit will apply in Oregon as well. If the court strikes down California’s law, down goes the capacity restrictions in Measure 114.

Unlike some of his fellow Oregon sheriffs, Landers said that he opposed Measure 114, but he plans to enforce the law if and when it goes into effect.

“I have also been asked if our office plans on enforcing the law,” Landers said. “Yes, we do plan on enforcing the law if it is ruled constitutional by any court challenge. While I may not agree with Measure 114 and was openly against it prior to the election, I have sworn to an oath to uphold the laws of this state, regardless of my opinion.”

It’s been hinted that Measure 114 will soon face a battery of legal hurdles in Oregon, but they have yet to emerge.