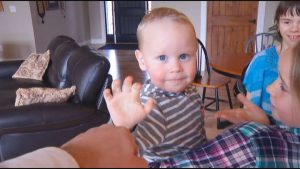 Baker City, Ore. — His family is calling it a miracle after an Oregon toddler recovered after drowning in a pond close to home.

22-month-old Matty Cunningham is safe and healthy today. Just 4 days ago, he was dead.

While his parents and siblings were doing some work around the house, Matty wandered off and somehow got through a barbwire fence and into a pond.

That’s where Elsa and Matt found their baby boy. This is the first time they’ve come to the pond since. Matt said, “That scene is just so poignant in my mind of just you know, a blue dead baby.”

Matty’s parents jumped into action, pulled their baby from the pond and started CPR. Meanwhile the rest of the family called for help.

Elsa said, “When I’m doing compressions, my children were on their knees praying and begging God for a miracle.”

Matty had no heartbeat and was only 84 degrees when helped arrived.

An ambulance then took Matty to the St. Alphonsus hospital in Baker City, but his journey was far from over.

Matty was then flown to St Alphonsus in Boise and then taken to the children.s hospital at St Luke’s.

Throughout all of this, Matty’s family, friends, even his doctor prayed for him.

Matty’s doctor said, “It’s always very, very stressful because so often the outcome is so bad.”

It took a lot work, a lot of medicine, and a lot of time.

But Matty’s parents said what happened 2 days later was an absolute act of God–as Matty woke up and spoke.

It’s the miracle his parents hoped and prayed for. Their baby boy was alive with no permanent damage.

Matty’s dad said, “We just fell to our knees and thanked God. Praising God. You almost wonder if you’re going to wake up, it’s just a dream that’s too good to be true. You’re just gonna wake up from it.”