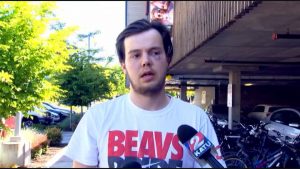 Nolan Butuso said, “We heard a noise about 5:30 in the morning, started hearing some banging.”

Nolan said after that rude awakening he and his roommates took action.

“One of my roommates started shouting, ‘Fire, fire, fire!’ I quickly grabbed my fire extinguisher that I had in my room.”

According to Nolan, they found flames near a back window and quickly put them out.

“Next thing we know we hear a scream coming from upstairs.”

The cries for help were coming from the room of the only woman living in the home.

“And so we start banging on her door to try to get in. That’s when the suspect steps out. He’s holding, I want to say a standard kitchen knife. And he punches me in the face, makes contact, gets me with the kitchen knife. After I kind of stumbled back he goes after the other two roommates that were there”

Nolan said the man had blonde hair and a white or blue bandanna covering his face.

He says he ran to his room to call 911 and came out to find the man was gone and everyone was hurt.

“One of her friends was there and he was severely injured, had a gash on his nose,” said Nolan. “And that was when we noticed the third roommate who was very, very injured. He had cuts on his eye, on his head and he was actually the one who was flown to Portland earlier this morning.”

Police said the suspect was arrested at a nearby senior center and hospitalized as well.

Officers are not releasing his name.

A police spokesman is also not officially identifying any of the victims.

OSU said one student and one former student are among them.