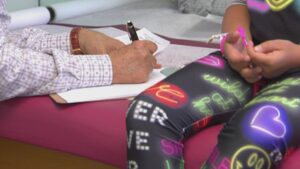 WASHINGTON, D.C. (NBC) – After several weeks of increases in the number of new infections of COVID-19 in children, a slight decrease was reported last week.

According to the American Academy of Pediatrics and the Children’s Hospital Association, nearly 80,000 new child cases were reported last week, a decline from the over 88,000 of new cases that were reported the previous week.

The experts say children represented 13.7% of all cases.

As of April 22 over 3.71 million kids have tested positive since the pandemic began.