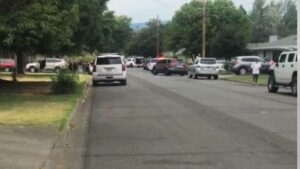 UPDATE 8:34 p.m.: Police released the name of a man who was arrested during Monday’s incident on SW Cottonwood Street. Grants Pass Department of Public Safety said they identified 43 year old Ajamu Lee Taylor as a suspect. The Grants Pass SWAT team was surrounding a home for several hours. Police said that ultimately Taylor and a woman both came out of the home peacefully.

Police said an adult victim was located nearby during the investigation and was taken to Three Rivers Medical Center with non-life-threatening injuries.

Taylor was charged with multiple criminal offenses, including Assault 1 and Unlawful Use of a Weapon.

Grants Pass police have arrested one person for unlawful use of a deadly weapon after shots were fired several hours ago.

Police closed the street off to the public.
Neighbors in the area are encouraged to call dispatch if they need to get to their homes.

At the time this article was published, investigators remained at the scene where a mobile command center was set up. The road remained closed.

Police haven’t released many details, but they did say they weren’t sure if the person who reportedly fired the weapon is still at the home or not.