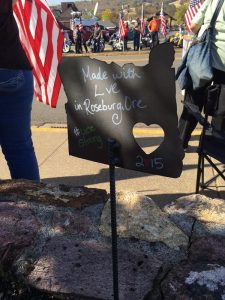 Roseburg, Ore. — UPDATE: President Barack Obama has departed Roseburg High School, and is en route to the Eugene Airport. From Eugene, President Obama will head to Seattle and then on to California. President Obama made a brief statement at the Roseburg airport before boarding Marine 1 for Eugene.

President Barack Obama arrived in Roseburg around 12:30 Friday after landing at the Eugene Airport around 11:40am. His motorcade travelled to Roseburg High School where he is meeting with the victims of last week’s shooting at Umpqua Community College.

The president was met with both support and protest, with signs reading “welcome to Roseburg,” and “please leave us in peace.”

Meanwhile, hundreds gathered at the Douglas County Fairgrounds where one of the victims, 19-year-old Lucero Alcarez, was remembered with a memorial. A private service is expected to take place at 2pm.

We have crews on scene in Roseburg and will continue to have the latest for you here, on facebook and twitter, and on NBC5 News at 5, 6, and 11.