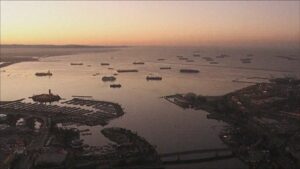 WASHINGTON D.C. (NBC)- President Biden today announced steps to speed up the movement of goods into the country and the transporting of those goods to store shelves.

Many large and small businesses have reported empty store shelves blamed on problems at some of the nation’s ports, worker shortages and COVID outbreaks. In the port of Los Angeles, cargo ships have long waits before the vessels can dock and be unloaded.

Today, the president announced Los Angeles and Long Beach, two of the nation’s busiest ports, will be operating around the clock. He says longer port hours will speed up the import of goods.

“Traditionally, our ports have only been open during the week, Monday through Friday. And they’re generally closed down at nights and on weekends,” explained President Biden. “By staying open seven days a week, through the night, and on the weekends, the port of Los Angeles will open over 60 extra hours a week, will be open. In total, that will almost double the number of hours that the port is open for business from earlier this year. That means an increase in the hours for workers to be moving cargo off ships, onto trucks and rail cars to get to their destination.”