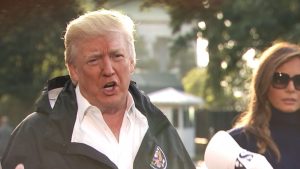 Mr. Trump spoke to reporters as he prepared to depart for Puerto Rico, where he’ll he survey damage left behind by Hurricane Maria.

“He was a sick man, a demented man, lot of problems I guess. We’re looking into him very seriously. We’re dealing with a very, very sick individual,” the president said.

When asked about tightening gun laws in response, Mr. Trump responded “We’ll be talking about gun laws as time goes by.”

He also praised the ongoing federal relief effort in Puerto Rico, but added “on a local level, they have to give us more help.”