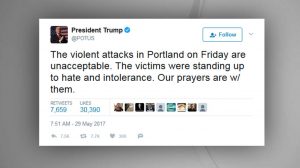 Washington, D.C. – President Donald Trump has reacted to the deadly Portland stabbing that left two men dead and one injured.

On Friday afternoon, a man began yelling anti-Muslin slurs at two women, one of which was wearing a hijab, on a Portland MAX train.

Three men tried to intervene, but the suspect stabbed them, killing two of the men.

The attacker, identified as Jeremy Christianson, was later arrested.

On Monday, President Donald Trump sent out a tweet condemning the attacks.

He wrote, “The violent attacks in Portland on Friday are unacceptable. The victims were standing up to hate and intolerance. Our prayers are w/ them.”

The third stabbing victim is being treated for his injuries and Jeremy Christianson is in custody.