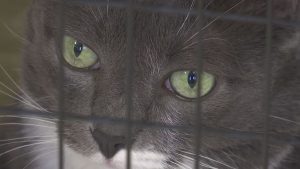 Medford, Ore.– A local program is offering discounts this month to help the community participate in an important campaign.

Spay/Neuter Your Pet organization has been around for 21 years in an effort to lower the number of stray dogs and cats around the county giving birth. While SNYP performs normal services throughout the year, the organization holds a special program in February called “Prevent a Litter.”

February is considered peak breeding season for both cats and dogs, but SNYP says they see a huge increase of kittens over the next several months.

“16 weeks old, it’s old enough to breed and now is the breeding season,” said Sally Mackler, director of SNYP. “That’s why we have these special certificates timed right now to prevent the litters from coming in.”

For the rest of February, discount certificates will be available for purchase at any of the Grange Co-op locations in the Rogue Valley as well as the Mini Pet Mart on Stewart Avenue.

The certificates cost $25 for cats and $75 for dogs up to 60 lbs. They can be redeemed at various animal shelters around Jackson County that perform spay and neutering.

SNYP asks that if you have a feral cat that you believe needs to be spayed or neutered, call their number 541-858-3325 for assistance.