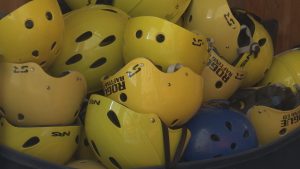 GOLD HILL, Ore.– This year’s mild winter had some local rafting companies concerned about the upcoming season. But with several late showers and snowstorms – things are looking up.

For Rogue Rafting Company in Gold Hill, the average water levels for this time in the season can be measured visually.

“Basically right up into these green willows that you see on the other side would typically be covered up,” said Ben Bansen, owner of Rogue Rafting Company. “So another foot or so higher right through here.”

According to Bansen, the water levels of the Rogue River at this time are at about 3,000 cubic feet per second, about 4,000 shorter than it was at around the same time last year.

For rafting companies like Rogue Rafting that rely on full rivers, the dry weather was a little nerve-wracking.

But now as the season starts to get underway, the season is looking brighter.

“Yeah the spring has been really nice so far just because we have got some late storms, a little extra snow,” said Bansen. “It was looking pretty rough early on in the winter, definitely makes us nervous.”

According to the U.S. Army Corps of Engineers, this year has been pretty average in terms of water levels–which isn’t a bad thing.

“We’ll be able to meet all of our goals for how much water we’re supposed to release throughout the year,” said David Tucker, operations section chief for the Rogue River Basin. “That’s definitely a better place to be than if we didn’t have the reservoirs.”

As a main contributor to the Rogue River, the Lost Creek Reservoir is an important source. With being nearly a foot within where it should be, the reservoir is holding more than enough to distribute but the river may not reach average levels.

“The flows throughout the remainder of the summer are anticipated to be lower than what we would expect on average because of the lessened contribution to the river through other tributaries that are downstream,” said Tucker.

That’s exactly what customers are looking for in a rafting trip though.

“It is nice to have more water especially in this time of year,” said Bansen. “People anticipate spring rafting or early summer rafting as like the peak flow for the season, which can intensify the rapids, makes for a more splashy ride.”

Regardless of how the river turns out for rafting companies in the valley, the season should be just fine.

“Each year it seems like we have more and more preseason bookings which is always nice to see and this year isn’t any different,” said Bansen. “It looks like it’s gonna be a really fun season.”