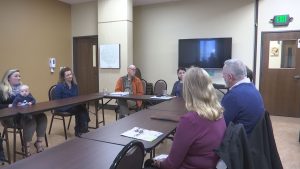 Medford, Ore. — U.S. Representative Greg Walden visited community health center officials today as part of a trip to learn more about how to improve services for the community.

After meeting with the Oregon Education Association Monday morning, Congressman Walden visited the La Clinica Wellness Center where officials from centers such as La Clinica and Rogue Community Health shared their perspectives on health issues and programs that have succeeded in helping people.

During the discussion, Walden addressed the uncertainty officials faced during the government shutdown over a federal budget.

“We need to get started pretty soon to look at the next two year funding so that we don’t have this unnecessary gap that occurred,” he said. “Now they still got the funding along the way but it made planning nearly impossible.”

Congressman Walden says Oregon could be considered a national model for full patient services but he says there’s still more work that needs to be done.

“Health issues continue to be something we need to put more work into especially on opioids and the horrible rate of addiction and overdose that’s occurring in our country,” he said.

Walden also touched on gun reform after the recent mass shooting in Florida describing how he has supported legislation through the House that would improve the federal background check system for gun purchasers.