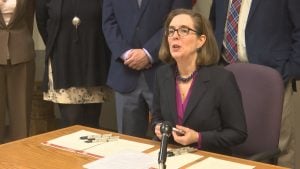 OREGON — A group of Republican lawmakers are suing Oregon Governor Kate Brown for her response to the Covid-19 pandemic.

The group alleges the governor violated the state constitution with her executive orders.

The group says the governor abused her authority by putting restrictions on businesses and issuing stay at home orders.

“We’re wondering how is it that the governor has the ability to universally change all these things that people my age and younger have known for all their lives,” said Oregon Senator Dennis Linthicum of Klamath Falls.

A Baker County Circuit Court judge sided with the churches.

Governor Brown appealed the decision to the state supreme court, which upheld the governor’s mandates.

NBC5 News reached out to the governor’s office on Monday for comment.

We got this response back:

“Our office does not generally comment on pending litigation, so I can’t comment on this lawsuit. What I can say is that the Governor is focused on implementing measures to keep Oregonians healthy and safe, based on the advice of doctors and health experts and what the data shows will limit the spread of COVID-19: wearing face coverings, maintaining physical distance, washing hands, staying home when sick, and limiting large gatherings.”