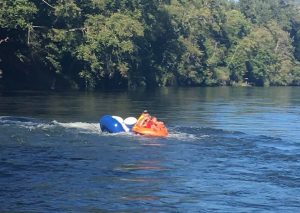 The woman and two children became stranded in the middle of the river when their inflatable devices snagged debris. All three were wearing life jackets and were not injured.

But deputies say this incident brings up another safety issue they’ve seen this summer – people floating the river on inflatable “rafts” or toys that aren’t made for use in the river. While it’s not specifically illegal to float on the river with novelty inflatables like the one pictured, it’s not safe. They are designed for pools or near-shore use in a lake – they aren’t made to withstand rapids, rocks, and debris like you will find in the Rogue River.

Be sure to check the label and heed the warnings.