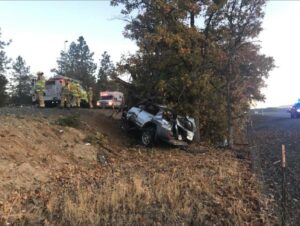 JOSEPHINE COUNTY, Ore. – Police have publicly identified the man who was killed in a single-vehicle crash on Interstate 5 in Josephine County Wednesday.

Oregon State Police said on November 11 at about 4:30 p.m., a Toyota Highlander driven by 49-year-old Matthew Ryan of San Francisco was traveling northbound on I-5 when it left the roadway and hit a tree near the Manzanita Rest Area east of the Grants Pass Airport.

Police released no further details about the crash.