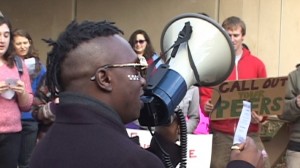 Ashland, Ore. — Southern Oregon University students, faculty, and community members are calling for an end to racism. Dozens gathered outside Stevenson Union Friday for a peaceful march around campus and through the streets of Ashland. Organizers say they want people to know racism is not dead.

“We’re really seeking to create a dialouge in this town, in a town that is more ready to address these issues.”