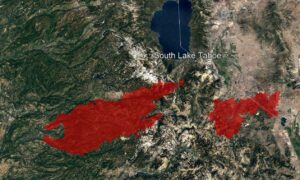 The expanded evacuation orders for the city of about 22,000 come as a red flag warning went into effect Monday for the Northern Sierra and Southern Cascades.

Some residents making their way out were set up in parking lots with all their necessary belongings packed in bins inside their vehicles. Pets and Porta-Potties were part of the parking lot landscape.

Traffic was backed up Monday afternoon for miles along Highway 50 as drivers were making their way out of the South Lake Tahoe area, eastbound toward the Nevada state line to escape the encroaching Caldor Fire.

One evacuee said, “This morning, so we did get the evacuation warning last night and this morning as I was packing, neighbors were knocking on my door saying mandatory evacuation, unfortunately, some were panicking. And now we’re just waiting to get out. Kind of a mass exodus, kind of expected coming this late in the game. But what can you do?”