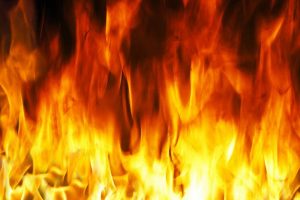 MEDFORD, Ore. – Big plumes of black smoke were spotted in west Medford just after 1 p.m. on August 19. Fire Chief Eric Thompson says it was due to a structure fire, just off Jackson Street this afternoon.

The fire chief said a shed behind a house caught fire. It then spread to the backyard, fence and the side of the home. He said they were able to get the fire under control in about ten minutes and there were no injuries, but said that the heat from the fire did some minor damage to a commerical building.

“We were watching TV and it was just a really loud explosion, and I ran outside and saw a bunch of smoke,” said a neighbor.

“Our deputy fire marshals are looking into it, talking with the area residents and anyone in the area that could help us determine what happened,” said Chief Thompson.

He said the fire might be suspicious, and deputy fire marshals are looking into the cause.