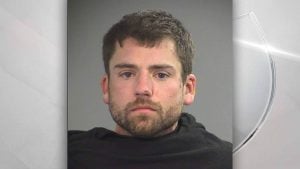 MEDFORD, Ore. – A domestic assault suspect was arrested after a standoff with Medford police.

Investigators said on June 12, there was a reported domestic disturbance in at an apartment in the 700 block of Crater Lake Avenue. The suspect in the incident, 35-year-old Charles Mott, allegedly strangled, assaulted and menaced a female victim with a knife. He fled the scene before police arrived.

Officers tried to track down Mott over the next few days, finally catching a break on the evening June 17 when they visited the apartment again. While nobody immediately came to the door, it was apparent somebody was inside. Eventually, Mott was seen walking out onto a balcony before ducking back into the building.

Medford police surrounded the apartment with SWAT officers. A short time later, the female victim was pushed out of the front door, which was shut behind her.

Unable to get Mott to exit the apartment, officers deployed gas in an attempt to flush him out. It worked, and at 1:01 a.m. Tuesday, Mott came out and was arrested without further incident.

Mott was lodged in the Jackson County Jail for assault, strangulation, menacing, harassment, and interfering with a report.