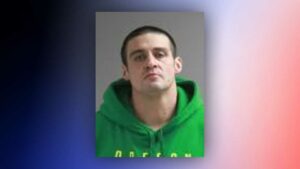 MEDFORD, Ore. — A suspect pleaded guilty to possessing an illegally-modified gun and fleeing from police.

The Jackson County District Attorney’s office said on December 20, 2020, a Medford police officer tried pulling over a vehicle on Crater Lake Avenue near Temple Drive for a traffic violation.

Suddenly, the officer heard what sounded like a gunshot and the vehicle drove off.

During the pursuit, a shotgun was reportedly thrown from the suspect’s vehicle. It was later recovered and determined to be a shotgun with a sawed-off barrel.

Eventually, the Jackson County Sheriff’s Office intercepted the vehicle in the community of Prospect. They deployed spike strips and used a PIT maneuver to bring an end to the pursuit.

The driver, Anthony Robert Flores, was arrested and booked into the Jackson County Jail.

Prosecutors said Flores unintentionally fired the shotgun while trying to hide it during the attempted traffic stop.

On January 8, 2021, Flores pleaded guilty to one charge of endangering an officer, one charge of fleeing or attempting to elude an officer, and one charge of unlawful possession of a machine gun, short-barreled firearm or silencer. He was sentenced to 14 months in prison.