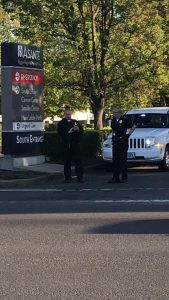 According to Medford Police Department, a 60-year-old man arrived at the hospital’s emergency room parking area about 4:30 a.m. and menaced a security guard with a gun. At one point, the hospital confirms the man was inside the building.

Officers responded and the hospital called a “Code Silver” which indicates a person with a weapon on campus and immediately puts safety protocols into place to patients and staff.

Police say the man indicated he wanted to kill himself.

As officers negotiated with the man, the hospital locked down several doors, cancelled classes at the Smullin Center and encouraged visitors to stay away.

At about 8:00 a.m., SWAT members were able to deploy less lethal force options and safely took the man into custody. According to the hospital, the man is in custody there under medical evaluation. Police say he will likely face menacing charges.