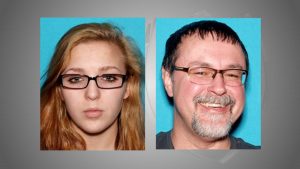 Update (04/20/17 10:45 a.m.) – The Tennessee Bureau of Investigation released additional details after a nationwide search for a missing student who was allegedly kidnapped by her teacher.

According to TBI, authorities rescued Elizabeth Thomas and arrested Tad Cummins after the pair were found at a commune in Cecilville, California on Thursday.

Cummins surrendered without incident, according to police in Tennessee. He is currently in custody in Siskiyou County facing charges of sexual contact with a minor and aggravated kidnapping.

Authorities are working to reunite Thomas with her family.

“Our Intelligence Analysts and Agents have worked tirelessly since issuing this AMBER Alert to process more than 1,500 leads from all 50 states,” said TBI Director Mark Gwyn. “What happened in California this morning, however, proves it only takes one person to lead to a successful end. We are extremely thankful the hard work of all partners in this search has paid off. We’re also grateful for the public’s support and vigilance throughout this search effort.”

Cummins was suspended from teaching at Culleoka Unit School, where Thomas attended, in February after the two were reportedly caught kissing.

Thomas’ father said he thought Cummins was grooming children in his class, telling them he had previously worked for the FBI and CIA.

“He had lied to all these kids,” he told NBC News. “I told them it couldn’t possibly be true.”

Cummins’ wife had pleaded for her husband to surrender. “For your sake and for Beth’s sake, please go to the police or please just drop Beth off somewhere safe,” Jill Cummins said.

Jill said she filed for divorce at the end of March.

SISKIYOU COUNTY, Calif. – Multiple news sources are reporting a Tennessee teacher accused of kidnapping his 15-year-old student has been arrested in Siskiyou County. The student, Elizabeth Thomas, has reportedly been recovered safely.

NBC5 News has a reporter headed to northern California to confirm more details about this breaking story.

According to WKRN-TV, the Siskiyou County Sheriff’s Office confirmed the Nissan Rogue used by Tad Cummins and Elizabeth Thomas was found in the county. The station also reports the license plate had been removed from the car, which was confirmed to belong to Cummins through the VIN number.

Cummins, 55, is accused of kidnapping Thomas, 15, on March 13 in Columbia, Tennessee. They were captured on surveillance two days later at a Walmart in Oklahoma City but weren’t been seen since.

At this time, Cummins faces a kidnapping charge in the AMBER Alert case and is also charged with sexual contact with a minor after he allegedly kissed Thomas at school earlier this year.