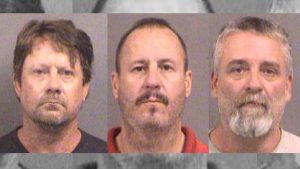 Garden City, Kan. (NBC News) — The FBI says three men were arrested in Kansas, charged with plotting to bomb an apartment complex housing about 120 people, mostly Muslim Somali refugees, with one apartment used as a mosque.

Prosecutors say the three men, Patrick Eugene Stein, Curtis Allen, and Gavin Wright, all in their late 40’s, talked for months about killing Muslims and decided they wanted to attack the apartment complex with car bombs.

Acting U.S. Attorney Tom Beal said, “These charges are based on eight months of investigation by the FBI that is alleged to have taken the investigators deep into a hidden culture of hate and violence.”

People from Somalia and Southeast Asia who work at a Garden City meat packing plant now dominate the area’s population.

Residents of the apartment complex said word of the arrests was frightening, “Now I’m feeling unsafe with what I hear. It’s not something good.”

The FBI says Stein would drive around yelling obscenities at Somali women and called Muslims “cockroaches”.

The FBI kept the men under close surveillance since February and moved in Friday, after they acquired weapons and began making the components for bombs.