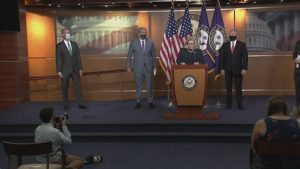 The administration told Republican members of Congress on Monday that the intelligence wasn’t, in their words, “actionable.” But the top Republican on the Armed Services Committee said he has more questions and that any indication of a bounty on the heads of American forces is a top intelligence priority.

Representative Liz Cheney (R-WY) said, “We remain concerned about Russian activities in Afghanistan and around the world. We are going to continue to work with the administration, we anticipate additional briefings on this issue but I want to be absolutely clear that America’s adversaries should know and they should have no doubt that any targeting of U.S. forces by Russians, by anyone else, will face a very swift and deadly response.”

Representative Mac Thornberry (R-TX) said, “Do I have additional questions and what to pursue other lines? Of course I do. And I think you will see, from our committee, to continue to push the intelligence community to discover everything they can possibly find out about any threat to our service members but particularly if a nation state is putting a bounty on their heads we should leave no stone unturned.”

The ranking Republican on the House Foreign Affairs Committee, Rep. Mike McCaul, said intelligence about the bounties may have been included at some point in the president’s daily written briefing, but not conveyed as a formal threat because the information wasn’t developed.