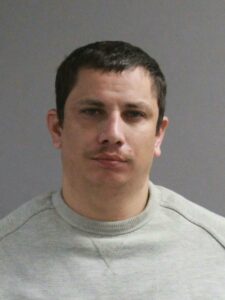 MEDFORD, Ore. — Almost 10 pounds of cocaine and 30 pounds of marijuana is off the streets, according to MADGE (Medford Area Drug and Gang Enforcement) and IMET (Illegal Marijuana Enforcement Team) on Wednesday. In a Facebook post, the Medford Police Department said detectives received information that 31-year-old Eduardo Quinonez was involved in drug sales in the valley.
Police said Quinonez was on probation for Felony Elude, so MADGE/IMET detectives assisted with a probation compliance check at his home in Eagle Point. There, investigators said they found 9.5 pounds of cocaine, 30 pounds of marijuana, 8 firearms, body armor, along with scales and packaging.
Quinonez is a convicted felon and not allowed to possess firearms, or body armor. He was charged with Unlawful Possession of Cocaine, Attempted Delivery of Cocaine, Unlawful Manufacture of Cocaine, Unlawful Possession of Marijuana, Unlawful Manufacture of Marijuana, Felon in Possession of a Firearm x 8, and Felon in Possession of Body Armor.