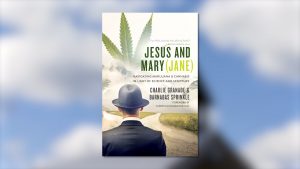 MEDFORD, Ore.– Two southern Oregon pastors have teamed up to write a book about cannabis.

The book titled Jesus and Mary (Jane) takes a look at the effects marijuana can have on developing minds and also it’s healing qualities.

Charlie Granade, pastor of Grace Baptist Church in Rogue River, and Barnabas Sprinkle, former pastor of Westminster Presbyterian Church in Medford, collaborated over the last year to write this book.

Granade says he was driven to write after receiving numerous questions from his congregation on how they should view marijuana.

“Recreational marijuana had just become legal and so a lot of people were asking questions like is it a sin to smoke marijuana and things like is it safe to use,” he said.

Granade says their research shows marijuana is dangerous for young teenagers. But there’s no denying there are benefits for people who suffer from a variety of ailments.

The book wants to argue against using marijuana as a coping mechanism. Rather, it suggests finding other ways to find fulfillment.

“Walking in the holy spirit. We believe that that leads to the most abundant life and then these other things that we try to stuff in that hole in our hearts will never truly fulfill us,” said Granade. “It’s not just about marijuana, it’s about anything we’re trying to put in place of god.”

The authors hope the book can be a way to provide guidance to churches all over the country in tackling the question of marijuana.

The authors say the book is now available on both Amazon and Kindle.