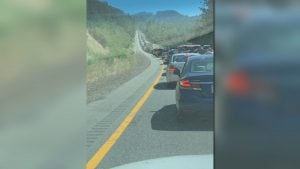 SISKIYOU COUNTY, Calif.– Holiday travel was brought to a standstill on I-5 Sunday afternoon as drivers heading south in Siskiyou County hit a traffic jam that lasted for hours. As some witnesses described it, cars were bumper to bumper and most times barely even moving.

The location of the backup happened at a construction point between Weed and the Dunsmuir Scales in the early afternoon as drivers suddenly hit a bottleneck of cars merging into one lane. One witness driving north says the back-up stretched for nearly 14 miles.

Cal Trans District 2 says that area is currently under construction with only one southbound lane available. The other lane couldn’t be opened for the holiday because there wasn’t any road built for cars to use.

On top of the construction and influx of travelers, Cal Trans says many people were attempting to avoid the traffic and map their way around it with apps on their phones. However, those ended up taking drivers on backroads and away from the interstate, extending their trip.

Jane Seeley, who lives in Mt. Shasta near the interstate, said the road right outside of her house was backed up for nearly five hours with cars leaving the highway.

“It was kind of insane yesterday,” she said. “Just looking out at this traffic grid jam which is something we just don’t normally have.”

Seeley says CHP and Siskiyou County Road Department later were working on redirecting people back onto the highway to keep them off of what she described as unsafe back roads.

Cal Trans says this backup could happen any weekend with the construction but holiday travel made it really bad Sunday. According to AAA, some 41.4 million Americans were expected to drive this year for the Fourth of July.

The bottleneck and traffic lasted well into Sunday night. Travelers say that section can normally take 15 to 18 minutes but this caused delays of 2 hours or more.

“I can’t imagine the pain, that it must have been very painful to have this two-hour backup as you’re trying to go home after this wonderful holiday celebration,” said Seeley.

Cal Trans says it plans to have construction complete in the fall. But drivers are worried about the next holiday if it’s not complete by Labor Day.