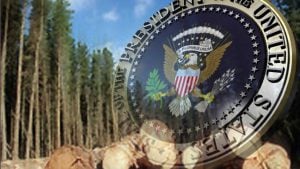 WASHINGTON, D.C. – In an attempt to level the playing field for American lumber companies, the Trump administration is imposing tariffs up to 24% on Canadian lumber shipped into the U.S.

Commerce Secretary Wilber Ross said about 31.5% of hardwood and softwood in the U.S. is imported from Canada. He added a “twenty percent tariff on that is essentially a billion dollars a year.”

According to a CNN Money report, U.S. lumber companies say Canadian firms receive unfair subsidies from their government, allowing the firms to sell their lumber in the U.S. at prices that American firms can’t afford.

A spokesperson for one of the companies targeted said in a statement, “Managed trade only serves to benefit large timber barons in the U.S. while adversely impacting U.S. consumers and millions of hard-working Americans in the housing sector.”

The lumber dispute between the U.S. and Canada goes back decades. In 2002, a 30% tariff was imposed on some Canadian lumber.

The latest decision comes as the U.S., Canada and Mexico prepare to renegotiate NAFTA, a trade deal the President Trump has routinely criticized.