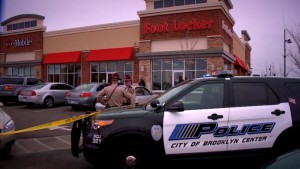 Witnesses said an argument inside the Foot Locker store spilled out into the parking lot and “several shots” were fired. That argument reportedly started over the new Nike Air Jordan shoes released Saturday.

The possibility that two people were shot over a pair of shoes had some on the scene shaking their heads.

“In all reality, it’s our fault,” lamented Latrissa Favorite, who looked on as police investigated. “Our mentality needs to change, then we wouldn’t have things like this happen because its not the shoes. We can take those Jordans away and it will happen over something else. I think the mentality of our people needs to change and we won’t have incidents like this.”