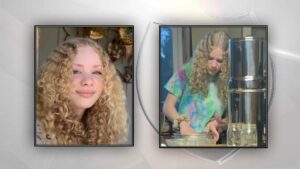 Deputies said on the evening of May 26, 14-year-old Mia Elizabeth Noriega-Renaldo was reported missing by her mother. The teen reportedly left their home on Sitka Lane the night before and took a lot of personal property with her, which makes investigators think she planned on being gone for a long time.

The sheriff’s office said it’s not known where Mia may have gone. Her biological father lives in southern California and has been contacted by investigators.

Mia has blue eyes and blonde hair. She weighs about 115 pounds and is 5’4” tall. Deputies said she should be carrying a small yellow purse and a blue and white striped bag. She took the following items with her: white Nike Air canvas shoes, green hoodie, blush pink windbreaker hoodie, black Hollister jeans, light blue Hollister jeans, grey sweatpants with multicolored butterflies, a white make up bag with black letters that says, “this bag contains my face,” newly-purchased stackable silver rings, a new rose gold ring with a blush-colored large gem.

Anyone with further information is asked to call the sheriff’s department at 541-247-3242.