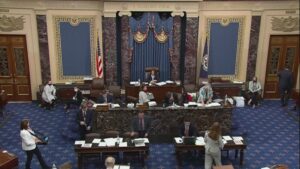 WASHINGTON, D.C. (CNN) – The Senate has failed to advance a bill that would have created a commission investigating the January 6 insurrection at the U.S. Capitol.

The bill would have set up a 10-person bipartisan panel to look into law enforcement preparedness and response on January 6.

It would have also provided recommendations to prevent further acts of targeted violence.