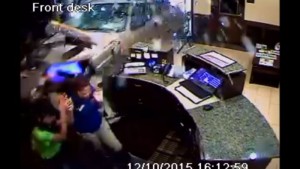 Okla. — (KFOR) Authorities say an irate customer drove his truck through the front lobby of an Oklahoma hotel, and it was caught on camera.

Last Thursday, police were called to the Comfort Inn and Suites in Alva after a man allegedly became upset because the hotel charged his credit card.

As the officer was trying to calm the man down, he allegedly threw the truck into drive and sped toward the front entrance, slamming into the lobby.