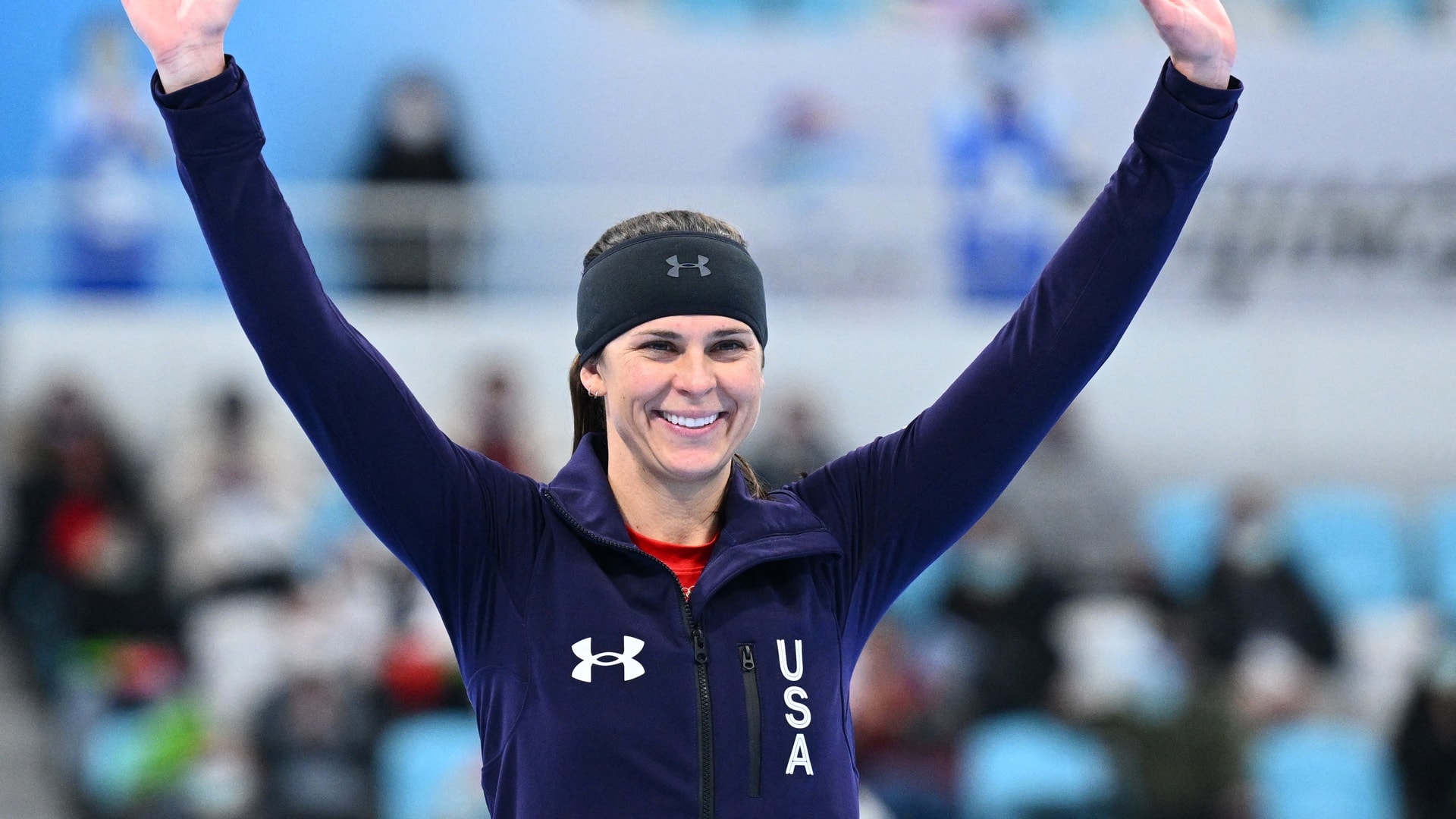 BEIJING — This one was for Brittany Bowe.

In the last two weeks, Bowe’s generosity and team spirit have shaped her 2022 Winter Olympics experience.

At last month’s U.S. Olympic Trials, she gave up the spot she earned in the 500m so that teammate Erin Jackson could have it, paving the way for Jackson to become the first Olympic speed skating champion from the United States in 12 years.

Bowe also was one of two flag bearers for Team USA at the Opening Ceremony, proudly filling in for bobsled pilot Elana Meyers Taylor who had been selected but was in isolation after testing positive for COVID-19. Bowe was runner-up in the women’s vote.

Those pivotal moments were “two of the most special things that have ever happened to me in my life,” Bowe said. “There hasn’t been a more powerful and united experience that I’ve been a part of. To be selected to lead Team USA out into the world for the Beijing Olympics is an honor of a lifetime.”

On Thursday, Bowe added another distinction to her long list of honors.

Naturally, she was immediately thinking of others.

“I cannot wait to share it with countless number of people who have been with me along the way,” Bowe said.

The Ocala, Florida, native who will turn 34 in a week, completed a journey that began a dozen years ago when she traded her inline skates for blades.

Although Bowe won a bronze medal four years ago in team pursuit, she longed for an individual medal to complete her trifecta of world championships (three in the 1000) and world record. It came in her ninth individual Olympic race.

“Looking up today and seeing a third-place finish, for a second it’s like, ‘Ah, shoot, I wanted to win that gold medal,’” Bowe said. “But just taking a moment and a deep breath, (I’m) completely honored to bring home this bronze medal to the United States tonight.”

Bowe came in as not only the current world record holder, but also the winner of two of the four World Cups this year. She was second and third in the other two.

At the 2018 Games in PyeongChang, Bowe finished in fourth place, coming oh-so-close to the podium after recovering from a concussion.

Skating in the last of 15 pairs at the National Speed Skating Oval, she knew exactly what she had to do.

“I like to listen and I like to watch,” Bowe said of the competitors before her. “Some people don’t, but I get fueled when that kind of stuff is announced and when I’m seeing the lap times.”

Two pairs ahead of her, she saw Miho Takagi of Japan, who came in with the fastest time in the world this year, clock 1:13.19 to break the Olympic record of 1:13.56 set by Jorien ter Mors in 2018. Takagi had already claimed three silver medals in Beijing.

“Obviously Miho put down a phenomenal performance, which was not unexpected,” Bowe said. “She has skated out of her mind this entire competition and I knew that was going to be a hard time to beat. But when that gun went off, I was going for gold. I can rest easy tonight knowing that I left everything out there on the ice.”

Bowe, who had earlier this week placed 10th in the 1500m and 16th in the 500m, couldn’t hear the spectators cheering as she came around her first turn.

“I’m so in the zone and dialed in that it’s almost dark everywhere except right in front of me,” she said.

She opened with a time of 17.6 seconds, equaling Takagi, but then fell off that pace.

“My first lap wasn’t quite where it needed to be,” said Bowe, who finished in 1:14.61 to trail Takagi and Jutta Leerdam of the Netherlands (1:13.83). “I’m not going to dissect it right this second. I’m going to enjoy winning a bronze medal.”

And she has another consolation. “No world records today,” Bowe said with a laugh. “I still have that one.”

After her race, Bowe hugged her coach Ryan Shimabukuro, and they skated a few meters arm in arm. The three medals won by the United States in long track speed skating at these Games are the most since 2010.

“And it’s not over for Team USA,” said Bowe, noting there are three events to go. “But so far three medals, I would count that as a huge win for us. I think Erin brought the winning way and really kick-started us for the men to go out there and win their bronze medal in the team pursuit, and for me to win this bronze medal.”

Bowe, Jackson and Joey Mantia, who competed on the team pursuit squad, are all former inline skaters from Ocala.

“It’ll be really exciting to get back stateside and I’m sure there will be a very warm welcome back in Ocala,” Bowe said. “For all the Ocala kids to bring home some hardware is really special.”

And she’s still feeling good wishes from her selfless decision at the Olympic Trials.

“Since Milwaukee, it’s actually been a very uplifting experience with the story surrounding myself and Erin,” Bowe said. “I don’t think either of us knew the magnitude of those actions, but very quickly we did realize and the amount of support and love that we have received has been really humbling. In times of so much division to see some positivity on the news and supporting each other has been really uplifting.”

Although Bowe’s future plans are up in the air, she is also trying to make sure Team USA has strong skaters to succeed her.

Kimi Goetz, who placed seventh Thursday in only her third full year of long track after switching from short track, said Bowe gives her technical feedback on the ice.

“She doesn’t treat me like a competitor,” Goetz said. “She wants to see me excel and improve. And it’s just amazing to have that on your side, the best in the world trying to help you get there as well.”