American-born Eileen Gu of China landed her first four-and-a-half-rotation trick in competition Tuesday to secure the debut Olympic freeski big air gold, simultaneously checking off the first of three events in her triple title pursuit at the 2022 Winter Games.

Reigning X Games champion Tess Ledeux of France landed the same spin on her opening run for a 94.50, identical to the score Gu later received on hers in Run 3, but couldn’t stick the landing on her two other attempts and frustratingly took runner-up silver.

American Darian Stevens finished 11th. She attempted a double 1440 on her final run but under-rotated. On camera awaiting her score, Stevens said she had tried the trick for the first time during training earlier in the week. 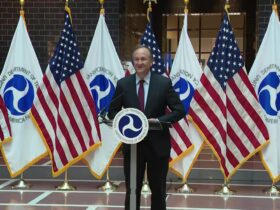