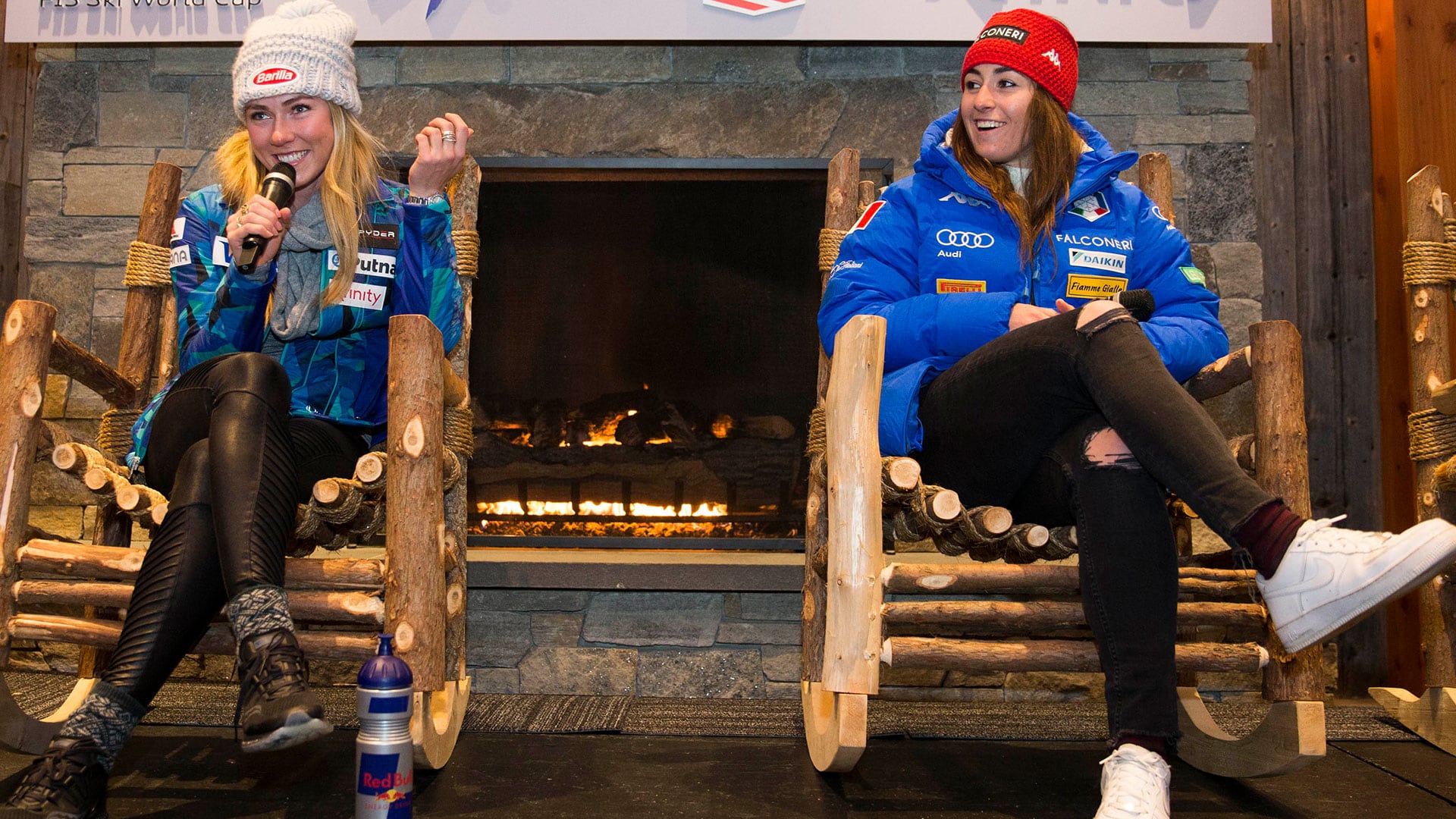 Think back to late December.

U.S. Alpine ski racer Mikaela Shiffrin, 26, had trained her body back into racing condition, following a back injury that had shut her down early in the season, and she had finished first and then second in consecutive giant slalom races in Courchevel, France. She seemed to be rediscovering the form that had given her 73 World Cup victories, five World Championships and three Olympic medals, and just in time, with the Beijing Olympics looming, and as many as five individual events in play. Then on Dec. 27, Shiffrin tested positive for COVID. Full stop.

Italian racer Sofia Goggia, 29, meanwhile, was on a roll. There had been three World Cup downhills and she had won all three by uncommonly wide margins; dating back to last season, she had won seven consecutive downhills. There had been four super-G races and she had won two of those and finished second in another. She seemed to be a near lock to become the second woman in history to win consecutive gold medals in the Olympic downhill (Germany’s Katja Seizinger was the first in 1994-’98), and a very live possibility to win or medal in the super-G. Less than two years after her home of Bergamo had been ravaged in the early months of the pandemic, she was racing with the city’s skyline decaled onto the back of her helmet, and at the peak of her powers.

Now think back to mid-January.

Shiffrin spent 10 days in isolation and returned on Jan. 4 to finish second behind Petra Vlhova of Slovakia in a slalom race in Zagreb, Croatia. It was the first of four races in eight days, concluding with an emotional victory in a nighttime slalom in Schladming, Austria, a victory that left Shiffrin in tears at the finish. “I’m crying a lot lately,” said Shiffrin after that win. She was crying because she loves the iconic Schladming hill, because it had been a long two years since the death of her father, because she had been chasing to recapture her own dominance. Because of everything. At last, she seemed ready for China.

On Jan 15, Goggia’s downhill winning streak ended when she crashed into the safety netting during a downhill race in Zauchensee, Austria. She emerged largely unharmed, and seven days later resumed winning, at a downhill in Cortina, the closest thing to her home mountain. Bullet dodged. Temporarily. Goggia is a fearless racer, fast but not always stylish; her best races are skied on the cusp of disaster. After her Cortina win, she went down again, 55 seconds into a super-G on the same Olimpia della Tofane course. Goggia’s left leg shot suddenly wide as her edge gave way, awkwardly, between gates; and her upper body whiplashed onto the snow before she slipped to a stop. The damage was significant – a partially torn ligament, small fibula fracture, and tendon damage. “I’m already going to start physical therapy,” Goggia said. But she faced difficult odds.

As January turned into February, Shiffrin was ascendant, Goggia earthbound.

The Olympic year is an unforgiving ride. Shiffrin has talked of thinking about specific Olympic races even in the heat of summer, grinding through dry land workouts. Dates are entered into a calendar app, moving ever closer. It is rarely an unbroken line from planning to podium. It is rarely predictable and never easy. And the Games care not in the least for predetermined narratives; Olympics – and Olympians – write their own stories.

On Monday night (Tuesday morning in Beijing), Shiffrin and Goggia pushed from the start house for the downhill, in consecutive positions – Shiffrin in bib No. 12, Goggia in No 13. The steep, craggy brown hillsides next to the course called “The Rock” had been turned white by weekend snow. For Shiffrin, the Games had been trying: She skied out of her best races, the slalom and giant slalom, completing just 11 gates and 16 seconds of racing. It was a stunning outcome that left Shiffrin publicly gutted both in her actions and words. She rallied to race the super-G, where a 9th-place finish was a moral victory, and talked more philosophically. “Participation is a privilege,” she said. It was a hard left turn.

While Shiffrin had raced three times, under glaring light, Goggia had not raced at all. She had trained and rehabbed, and pushed forward even working through a super-G training crash in China. When she finished a downhill training run on Friday night, she put her hands on her helmet in relief after finishing vertical. Again their roles had changed.

Think back to last night.

Shiffrin eased into her run with typically stylish skiing, but 30 seconds into the race, began losing time to leader Nadia Delago of Italy. Shiffrin is a good downhill racer, but an infrequent one. She has raced only 14 World Cup downhills in her career, and hadn’t been on long, downhill skis since early December (when she raced two downhills at Lake Louise in Canada). But she wasn’t entirely ready to flow at the – frankly, terrifying – pace of a downhill. “You feel the speed in some sections,” said Shiffrin. “And there were some spots when I was fighting the speed instead of going with it.” She came down in 11th place, ahead of only Ester Ledecka of the Czech Republic, who did not finish her run. By the end, Shiffrin was 18th, just behind teammate Keely Cashman. (The best U.S. medal chance in the downhill was Breezy Johnson, who three times finished second to Goggia this season, but was injured in January and is out for the season).

Goggia kicked out shortly after Shiffrin finished and tore into the run as if angry. Not stylish. Desperate. Goggia at one point had nearly a full second on Delago. Goggia lost time near the bottom, which would prove critical, but came in with a lead of .41 seconds. Ebullient and universally liked, Goggia skied to the slopeside camera and planted a kiss on the lens. “I was really happy with my skiing,” Goggia said. “I gave everything I had.”

There is an unwritten story in which Shiffrin finally found her best self and won a downhill medal. That did not happen, not even close. There is a story in which Goggia returns from injury to win the gold medal. That did not happen, either, although it was much closer. Two skiers after Goggia came Corinne Suter, a 27-year-old from Switzerland. Skiing with Shiffrin’s static style, but accepting the speed given by the hill, Suter finished in first by .16 seconds. Goggia was left with silver. “It’s the biggest dream of my life,” said Suter. “I don’t know what to say.”

As so often happens, Suter’s win looks more sensible, and less like an upset, after the fact. Though she had never won an Olympic medal, Suter won the downhill at the 2021 World Championships, and took the last downhill of the World Cup season, in Germany, after Goggia was injured. With Suter’s victory, Switzerland swept the downhill golds  (Beat Feuz won the men’s downhill) and now has four Alpine golds in China.

Goggia’s medal remains astounding. “It feels impossible that she’s even here,” said Shiffrin. “And then to get everything together for a race like the downhill.”

Goggia said, “It’s still a medal. It’s a great medal. It’s an unbelievable medal because of my condition in the last 20 days.” Goggia can leave Beijing at peace (much like slalom winner Vlhova left after winning her gold). Shiffrin is not finished. Much like after the super-G, she was disarmingly relaxed after the downhill. She described her run to NBC’s Todd Lewis as, “super fun.” But competition remains: Shiffrin will race the Alpine combined Wednesday night. One run of downhill, followed by a run of slalom. She was the combined silver medalist in 2018 in PyeongChang. Shiffrin also said she will ski the team giant slalom event on Friday night.

But the combined comes first. While Shiffrin was able to fairly describe the super-G and downhill as resets, she is high among the gold medal favorites in the combined. Expectations will be higher. “I’ve had time to think way too much,” she said. “That makes it hard to ski freely.”

And this: “Nothing is guaranteed. That is the No. 1 lesson many people learn at the Olympics. No guarantee of anything.” She was talking to media, talking to the world. But most of all, talking to – and about — herself.