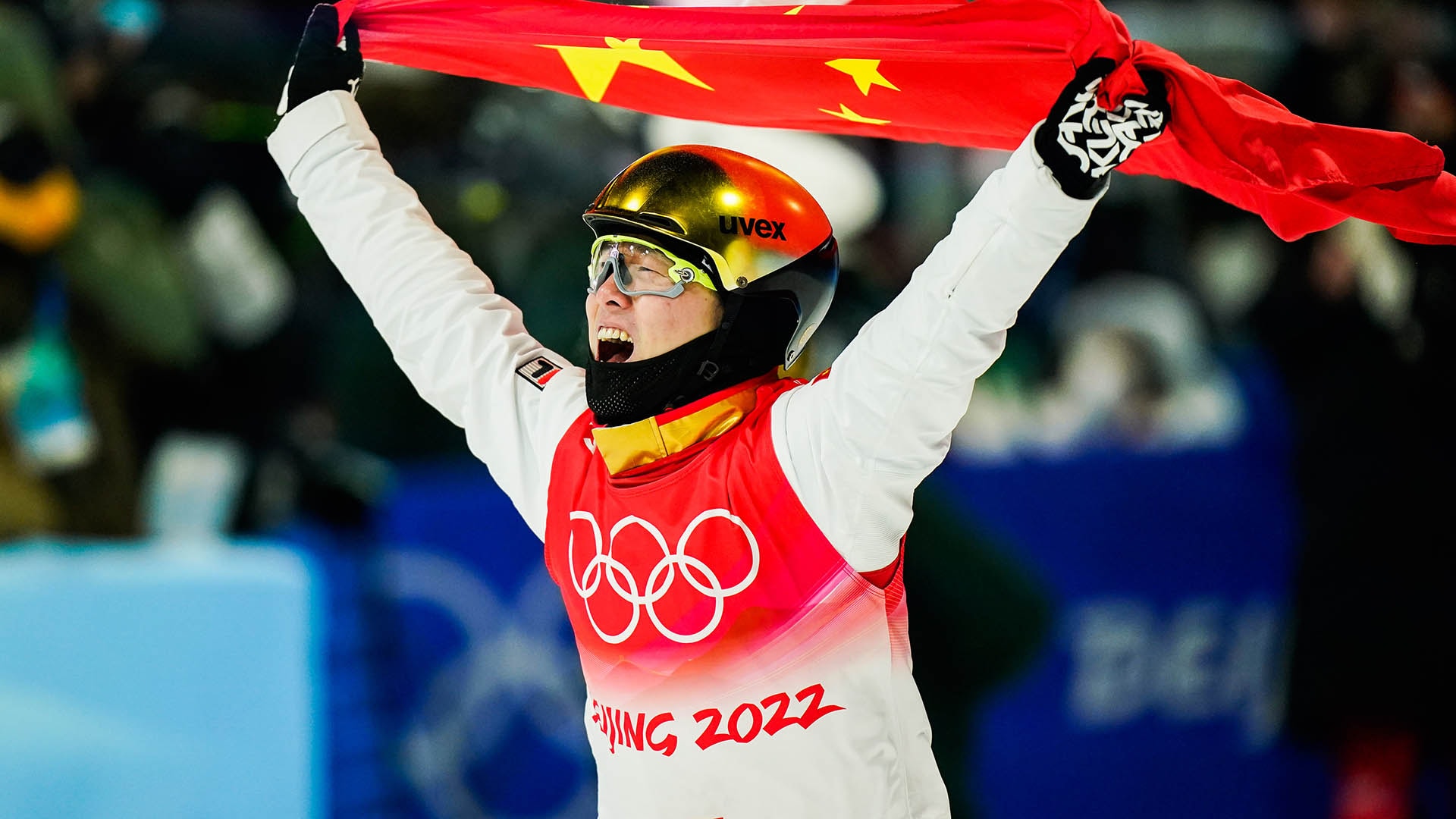 Seeking aerials glory at his fourth Olympics after top-10 finishes at the last three, Qi Guangpu found elusive gold Wednesday by sticking the sport’s most challenging trick under pressure, completing China’s double of the men’s and women’s events at the 2022 Winter Games.

Qi, 31, stomped a beautiful back double full-full-double full — colloquially known as a quintuple-twisting triple backflip, or quin for short — with a touch of deep compression on the landing yet nearly perfect air and form for a 129.00, joining compatriot and women’s victor Xu Mengtao as an Olympic champion.

All but one of the super-finalists attempted the quin, a trick with 2,880 degrees of rotation, and only Qi, a 13-time individual World Cup winner, was able to put it down soundly.

A member of the trio along with Xu that took silver in last week’s mixed team aerials event, Qi placed seventh in Vancouver, fourth in Sochi and seventh in PyeongChang. His gold is China’s first in men’s individual aerials since Han Xiaopeng‘s at the 2006 Torino Games.

Team event gold medalists Justin Schoenefeld and Chris Lillis of the U.S., both 23, made the top-six super-final but came up short on their quin attempts, finishing a respective fifth and sixth.

New York-native Lillis produced the third-highest score in the best-of-two Final 1, launching a back full-double full-full for a score of 125.67. But in the super-final, he put too much juice into his quin attempt – a trick with which he essentially clinched the team event, scoring a 135.00 – and had to stretch early, missing the landing for a 103.00.

Schoenefeld, meanwhile, tried the trick for the first time in competition but couldn’t quite get it around, tallying a 106.50. The avid pilot barely made it to the medal round in the No. 6 spot after Qi’s compatriot and double-Olympic medalist Jia Zongyang botched a back full-double full-full, adding to his mistake in the team event that arguably cost China gold.

Their teammate Eric Loughran, the top U.S. aerialist out of Tuesday’s qualifying, didn’t move through to the super-final after experiencing trouble on his first jump’s landing and wheeling out on a back full-double full-full, or quadruple-twisting triple, on his second.

Defending gold medalist Oleksandr Abramenko of Ukraine claimed silver, 12.85 points behind Qi, clinching a spot in the super-final with the same trick that earned him the title four years ago, a back full-full-double full, while 2018 bronze medalist Ilya Burov of the ROC avenged his younger brother’s early exit to repeat his result from PyeongChang.

Burov threw a quin to advance out of Final 1, eliminating his ability to attempt the trick again, as competitors can’t replicate jumps in the finals. But the bold move paid off as Schoenefeld, Lillis and Pirmin Werner of Switzerland couldn’t land theirs in the super-final, allowing Burov an opportunity to downgrade to a quad-twisting triple and still make the podium.

Maxim Burov, the two-time reigning world champion and overwhelming favorite, messed up both of his landings during qualifying and missed his second straight Games final.