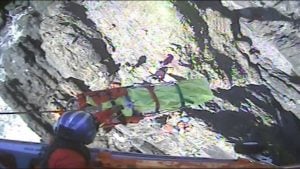 The Coast Guard’s North Bend Sector said law enforcement called them after the woman fell and sustained “substantial” injuries to her arms and leg.

The helicopter flew in and a hoist was used to pull her up.

Crews said she has two broken arms and a compound fracture of one of her legs.

Already this week, a fisherman was rescued, then a 69-year-old hiker was airlifted from rough terrain.

A Coast Guard pilot told NBC5 News Thursday’s rescue had to be done by helicopter. “There was definitely no way that someone would be able to carry her in a stable position off the rocks through the beach and to the shore.”

The pilot believes the uptick in rescues this week is due to the nice weather.

The Coast Guard advises outdoor enthusiasts to bring a locating beacon or portable GPS device that can show rescuers the exact location of a person in distress.

He said the devices, which are inexpensive, can save lives.