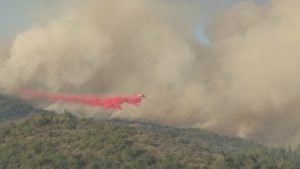 EAGLE POINT, Ore. — The Worthington Fire near Eagle Point has burned about 750 acres but it is fully lined and so far, 70 percent contained. The Bureau of Land Management said fire crews will be continuing to mop up for the next few days.

BLM also said crews are working on strengthening the fire line they already have set up.

“We’re here working on strengthening the containment line,” said Joel Brumm with the Bureau of Land Management. The Worthington Fire started on July 30, just after 3 p.m. and it quickly grew in size. “ODF had the initial attack, they hit it really hard, they used a lot of aerial resources and were really able to knock it down,” said Brumm.

The BLM wouldn’t say how much it has cost to get the Worthington Fire to where it is now. Brumm did say, “it’s an investment…firefighting is not cheap.” In order to fight the flames 600 personnel, 21 hand crews, 15 dozers, three water tenders and nine helicopters had been called in.

Brumm says the success of fighting the Worthington Fire is due to the kinds of resources available to them. He said that the BLM was, “able to get in here and use the air tanker, use a lot of aviation resources like helicopter drops,  because there aren’t a lot of other fires going on. That really worked to our benefit.”

BLM said crews on the Worthington Fire are taking COVID-19 precautions. “This year we are all with face masks and maintaining social distancing. We’re not having a camp set up where everyone is camping and eating together,” said Brumm.

While significant progress has been made, residents are on a level two evacuation. That has been lowered from a level three, but the Oregon Department of Forestry said residents there should still be ready to evacuate at a moment’s notice. Starting at 8 p.m. on August 3, the evacuation order will be lowered to a level one.

Several agencies are still working on the Worthington Fire, but BLM took over for the Oregon Department of Forestry on August 1st at 8 p.m.