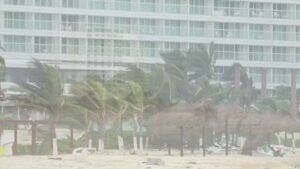 CANCUN, Mexico (NBC) – Officials in Mexico say the Yucatan Peninsula escaped serious damage from Hurricane Zeta before it headed toward the U.S. as a tropical storm.

The storm pounded Cancun and other cities on the peninsula overnight with high winds and heavy rain.

Officials said Zeta caused no loss of life in this region and local airports and hospitals were operating normally.

Power was knocked out for customers in two Mexican states.

After the storm passed, workers cleaned up sand and other debris from roads and sidewalks on Cancun’s hotel strip.

Zeta is the 27th named storm of a very busy Atlantic hurricane season.

The storm is expected to become a hurricane again as it barrels toward the states of Louisiana, Mississippi and Alabama.