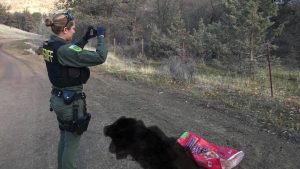 The sheriff’s office was first made aware of two dead dogs found dead at a ranch in the 13000 block of Ball Mountain Little Shasta Road on Saturday, January 6. Deputies went to the property to investigate and determined the two adult dogs were shot and dumped by unknown perpetrators.

Investigators determined the dogs were dumped recently. One was found stuffed inside a dog food bag.

One of the dogs was described as having short hair with tan patches. The other was brown with long, thick hair. Both weighed over 60 pounds.

Shortly after the initial investigation, deputies had to return to the property after a third dead dog was found in the same area.

SCSO said all the dogs appeared to be mixed hunting breeds. One resembled a bloodhound. Photos of the dog carcasses were not included in this article. However, they can be found on the Siskiyou County Major Crimes Unit’s Facebook page. The photos may be considered graphic by some.

The sheriff’s office considers this a case of animal abuse and illegal dumping. Sheriff Jon Lopey said, “Animal cruelty and illegal dumping are very serious criminal offenses and we are vigorously investigating this case in cooperation with Siskiyou County Animal Control. We will also attempt to develop additional leads by thoroughly examining the carcasses recovered in this case.  Anyone with information about this incident is urged to contact the SCSO’s 24-Hour Dispatch Center at (530) 841-2900.”