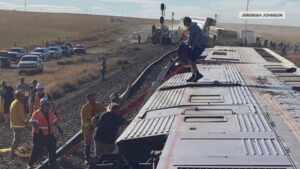 JOPLIN, Mont. (NBC) – An Amtrak passenger train traveling from Chicago to Seattle and Portland came off the tracks more than halfway through the cross-country trip, killing three people and injuring several others.

The chaotic scene unfolded along a rural stretch of northern Montana just outside of Joplin Saturday with roughly 160 people on board including 16 crew members.

The train was over halfway through its two-day journey from Chicago to Seattle and Portland when around 4:00 p.m., eight of the train’s ten cars came off the tracks.

Survivor Jacob Cordeiro said, “I’m a pretty big guy and I was picked up and thrown from my chair, straight into the wall.”

With four cars turned completely on their side, emergency responders had to pull multiple people out of the wreckage.

Montana Governor Greg Gianforte said, “They did have to cut in one of the cars to extract some of the individuals.”

Many locals in the area quickly rushed to the crash site to help.

Authorities say three people were killed in the accident and five others were in the hospital Sunday in stable condition.

The NTSB launched a “go team” and investigators are carefully clearing the debris looking for any signs of what caused the deadly crash.

Former NTSB board member Kitty Higgins said, “It strikes me that it’s going to be something to do with the train, the train cars themselves, and how they connected with the track, or in some fault or flaw in the track.”

BNSF, the company that maintains the railroad, said the section of track was inspected just two days before the accident and that “positive train control,” or “PTC,” was installed, a safety feature that prevents collisions and derailments by automatically adjusting a train’s speed and even braking.

Amtrak said it is “deeply saddened” by the fatal incident and is “fully cooperating” with investigators.

In the meantime, those who survived are still shaken by the tragedy on the tracks.