On October 19, 33-year-old Christopher David Grindstaff was booked into the Jackson County Jail on one count of criminal mischief in the first degree, a Class C felony. Deputies determined the weapon involved has a high-velocity air rifle firing .117 caliber pellet ammunition. The value of the drone was said to be more than $1,000.

The case will be forwarded on to local prosecutors and the Federal Aviation Administration for review.

WHITE CITY, Ore. – A local man is trying to track down the person who shot his down his drone.

When Charles Hidde comes to Hoover Ponds County Park bordering White City, he hopes to get footage of motorcycles and ATVs doing tricks.

While getting a closer look at a truck that looked like it may be stuck Tuesday, he didn’t expect his drone would be shot down. 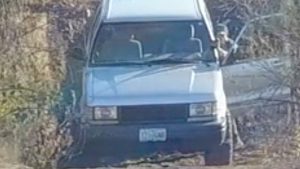 Footage from his drone shows the unmanned aerial vehicle getting closer to the truck. Suddenly, the drone goes crashes down to the ground.

Hidde said he thought his drone had malfunctioned, but when getting a closer look, he found some what appeared to be bullet holes.

Later, he was able to slow down the footage and zoom in to see exactly what happened exactly. It shows a man with what looks to be a rifle pointed at the drone before it fell to the ground. Moments later, the truck is seen driving away.

Hidde said flying his drone is a hobby of his. He said he simply wanted to get outside that day, but he usually uses it to get footage for his wife’s non-profit.

According to Hidde, he understands why people are skeptical of drones, but he only uses his on public property. “I could see if you know, someone felt their privacy was being invaded, but then again this is a public park of OHVs and riding dirt bikes and offroading and whatnot,” Hidde explained. “You know if I was out here flying. There’s houses, you know, 200 yards over there. I’m not gonna fly my drone over there because, you know, it’s above somebody’s house”

Shooting down a drone is a felony federal crime, according to 18 USC 32.

Police are investigating the incident. If you recognize the man and/or vehicle in the image below, call the Jackson County Sheriff’s Office. 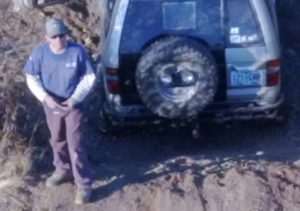