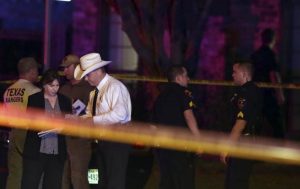 Law enforcement officers and investigators gather outside the scene of a shooting in Plano, Texas, Sunday. LM Otero / AP

PLANO, Texas — At least eight people are dead, including the suspect, after a shooting at a home in a Dallas suburb, authorities said.

The shooting occurred around 8 p.m. Sunday in the city less than 20 miles northeast of Dallas.

Plano police spokesman David Tilley said police initially responded to a report of shots fired. When the first officer arrived and went inside the home, the officer confronted the suspected shooter.

The officer opened fire, Tilley said, killing the suspect. Two others were injured in the shooting. Their conditions were not released.

The victims and suspect have not been identified. All of those killed and injured were believed to be adults.

Neighbor Stacey Glover told The Dallas Morning News that a party at the home had started early in the afternoon and she had seen people laughing and grilling outside. She says she then heard the shots around 8 p.m. She opened her door and smelled gunpowder. She heard police who arrived yell “hands up” before more shots rang out.

Neighbor Lauryn Nichols said she had a friend who had been in the house and she didn’t know what had happened to the person.

“I’m worried,” she told the newspaper. “It’s like one big family here.”

Police have not determined a motive for the shooting. Additional details were not immediately available.

Tilley said that a shooting of this magnitude was unusual for Plano, especially in such a quiet neighborhood. He could not say whether police had been called to the home before Sunday.

A police investigation is ongoing.